The best way to visit expensive places is by your own yacht. The next opportunity to buy you a yacht is the Nautical Boat Shows to be held in Cannes (Festival de la Plaisance: September 10-15, 2013)

At the Autumn Boat Shows, Azimut 80 will make its official debut together with the Azimut Magellano 53, along with the new Azimut Atlantis 50 in the Open and Coupè versions. Azimut’s new 15-metre yacht represents a real breakthrough and achievement for the company.

The cockpit with teak decking is very spacious and designed for socialising; it includes a large sofa astern and a dining table for eight. Among the most impressive elements are the two, floor-to-ceiling windows (1.6 m x 2 m. of glass) on the dining room wall which provide incredibly natural light and breathtaking views.

At the Cannes Boat Show, there are also great expectations for the 24-metre Azimut Yachts Flybridge, design to embody a lifestyle where comfort and wellbeing merge with a sophisticated and understated elegance.

With the success of their prior collaborations in larger models, Stefano Righini exterior design and Studio Salvagni Architetti interior design, team up once again. The result is a design which revolves around four different stylistic proposals, each one distinct in terms of colours and furnishing: Portofino, Dolce Vita, Firenze, and Riviera.

The interior layout includes four cabins and five bathrooms, for a total of eight/nine guests, and two cabins for captain and the crew. The 42 sqm flybridge is designed for maximum versatility.
The boatowner’s bathroom is particularly dramatic; it is at full-beam, with two entrances located aft of the cabin. It is practically a spa, with a Jacuzzi and central glassed-in shower stall, ensuring uninterrupted views from one side of the bathroom to the other.

The engine room has twin MAN 1550 hp engines, for a maximum speed of 29 knots. The fuel tank holds 6,000 litres, while the water tank holds 1,100 litres; option for outfitting with CMC Marine electric fin stabilizers and hardtop.

Azimut Atlantis 50 is available in both an Open and Coupè version, each delivering the same comfort and performance to meet the different needs of those who love to experience the sea in their own style, without compromising.

Azimut Atlantis 50 includes a series of innovations which have been carefully detailed (yet again) by the brilliant Neo Design team, rendering the yacht even more versatile and exciting. Sporty and elegant, the new 15-metre yacht is perfect for those who want an immediate connection with the sea, yet who also enjoy socialising. In the Open version, the main deck is a single open space with just a few steps dividing the bathing platform and the stern; while, the Coupé version offers the option to create a more intimate space by separating the inside and the outside with a three-leaf glass door. With the doors opened, the Coupé’s maindeck is transformed as well in a fully living space, totally equipped.

In both versions, astern, there is a comfortable sunbath area and the liftable swimming platform, allows an easy access of the tender to the sea and to host it in the underlying garage. The cockpit’s design, in the Coupè version, includes a table built into the sunbathing platform. The hardtop is electrically operated.

The Atlantis 50 accommodates four to six guests, with the option of adding a third cabin to complete the dinette. There are two spacious cabins, a Master and VIP amidships at full-beam; each is equipped with a large double bed, two closets, and private entrance to a bathroom with a separate show stall. Both cabins are especially light filled thanks to the picture windows and skylights.
The Atlantis 50 is equipped with twin Cummins 600Hp engines; these make it possible to reach maximum speeds of 33 knots, and cruising speeds of 29 knots. 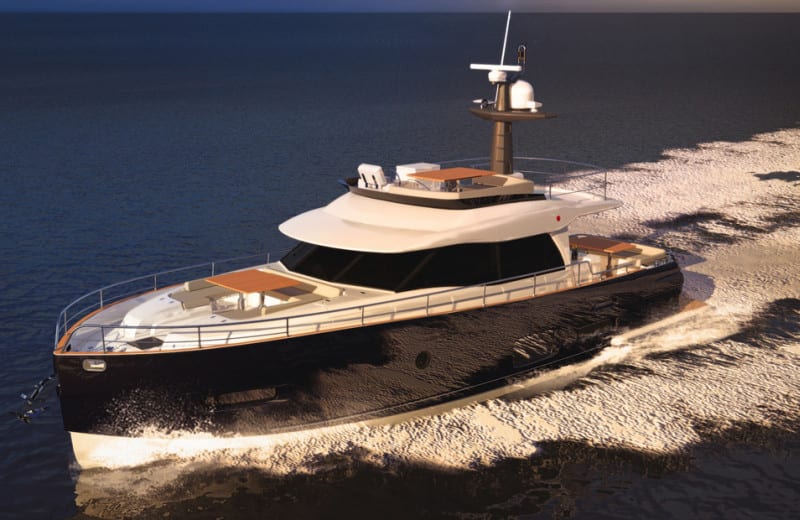 Bigger spaces allows Azimut to place in the aft part a crew cabin considerably spacious, as well as to transform the cockpit in an actual terrace (over 13 sqm wide). The Magellano 53 offers three cabins for up to six guests, as well as a high pantry in with enough space to allocate supplies, equipment and, occasionally, an extra bed.

The pleasure of cruising, the quest for the greater comfort onboard, the need for bigger storage spaces and higher autonomy during long crossing, all merged with the timeless charm of Italian design: that is the new Magellano collection’s philosophy , interpreted, once again at best, by Azimut with the very last Magellano 53, the new model that will replace the 50 which has already been sold on the most important markets: USA; Canada, Brasil, China, Hong Kong, Thailandia, Australia, New Zealand and -obviously- Europe.
Bigger spaces allows Azimut to place in the aft part a crew cabin considerably spacious, as well as to transform the cockpit in an actual terrace (over 13 sqm wide). The Magellano 53 offers three cabins for up to six guests, as well as a high pantry in with enough space to allocate supplies, equipment and, occasionally, an extra bed.

The internal décor is a mix between the warm shades of the leather and the Canaletto Walnut; at shipowners’ disposal, a wide range of materials to choose from, for the ultimate customization.
The Dual Mode semi-displacement hull, designed by Bill Dixon exclusively for the Magellano collection, ensures a smooth navigation, even with head sea, reducing the pitch’s width and naturally diminishing the impact in the waves.

The 600 mhp engine can reach a cruising speed of 16 knots (max 20 knots) and offers a good torque to propel the boat even in very rough sea conditions.