After Bonhams May sale, which included sixty-four pristine Hermès bags, realizing a total of £562,750 now all eyes are on the Bonhams Jewelry sale in Knightsbridge, London on 28th November, where eighteen iconic Hermès handbags from a private collection will come to auction. 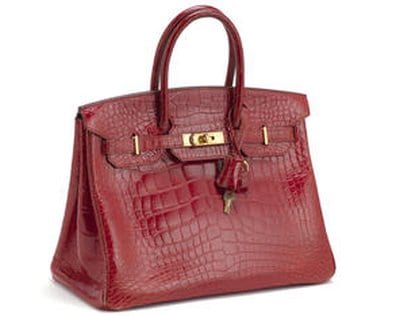 One of the highlights of the collection for sale in November is a red crocodile Birkin bag (named after British actress Jane Birkin), estimated at £28,000 – 30,000. Other handbags cover a range of Hermès most popular designs, including a mini Kelly bag (named after Grace Kelly, who in 1956 had just become Princess of Monaco) in miel crocodile, estimated at £15,000 – 20,000, a blue ostrich Bolide bag, estimated at £6,000 – 8,000, several Constance bags and a custom-made special order Birkin bag.

In addition to the mini Kelly bag, six full-size Kelly bags in crocodile and leather will also be included in the sale, ranging from a lower estimate of £10,000 to a higher estimate of £15,000.