James Bond’s swimming trunks was sold for $71,876 in Christie’s auction named “50 Years of James Bond – The Auction” (28 September to 8 October 2012). The sales results exceeded the initial estimate of $4,830 – $8,050.
The pair of swimming trunks by La Perla, was worn by Daniel Craig as James Bond in Casino Royale. The navy and powder blue nylon trunks labelled GrigioPerla, was made in Italy, and size is L (I wonder if the buyer will try it after purchase …) 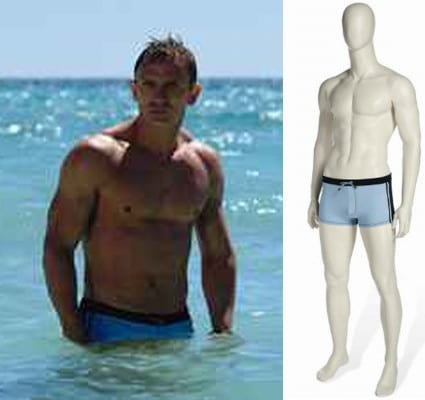 The auction highlight included a 2008 Aston Martin 6 Litre V12 DBS 2-Door Coupe illustrated above used by Daniel Craig as James Bond in Quantum of Solace. The Aston Martin DBS plays a dramatic role in the opening sequence of the film in which Bond skillfully navigates winding roads in a high speed car chase in Italy. The car is expected to fetch between £100,000 and £150,000, with all proceeds from the sale of this lot to benefit Barnardo’s. Aston Martins have long been a favourite with Bond and first appeared in Goldfinger in 1964 with the iconic DB5. Over the years they have featured in a total of ten Bond films. James Bond drives an Aston Martin DBS in Casino Royale and Quantum of Solace.

The action was to celebrate the 50th anniversary of James Bond on film.

Van Cleef & Arpels brooch sold for $1.83 million
It set a record for the sale of comic book art: $1.6 million
Auction: the clock that has not moved for 279 years
Pieces of American history for sale
Bead Bird Sold for $55,000
Original thermometer invented by Fahrenheit offered at auction
$500,000 for a shoe