Worldwide preview for the new Azimut S6 in Cannes

Azimut S6 is the second model in the new S generation sports range from Azimut Yachts, featuring the extensive use of carbon for its construction and representing another milestone in the shipyard’s pioneering research and development work. The combination of Carbon Tech and a propulsion system with three Volvo Penta IPS pods puts the yacht at the forefront of technology in its category, with the ability to achieve unprecedented levels of efficiency combined with peerless handling and silent running. S6 will be presented as worldwide premiere at the Cannes Yachting Festival 2018. 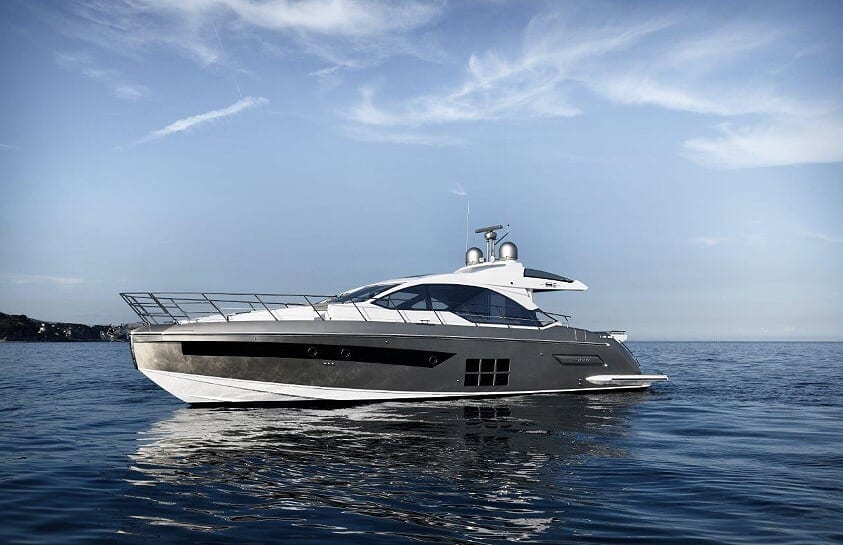 The little sister of the S7, recognised as a design icon after featuring in the installation at Milan Design Week last April, the S6 is a pure coupé with sporty DNA that looks set to leave its mark in the history of yacht design evolution, offering unprecedented levels of efficiency obtained with the help of the three Volvo Penta IPS propulsion pods and Carbon Tech.

The exteriors designed by Stefano Righini reflect and accentuate the collection’s inborn sportiness. The bow shield on the trapezoid bow and the glazed surfaces in the hull, distinctive features of the S generation, which on this model are even larger and rectangular in shape, give the yacht an immediately recognisable profile and flood the interiors with light, particularly in the owner’s suite.
The silhouette of the yacht is given an even more distinctive look by the big diamond-shaped deckhouse windows, which are built on slightly different planes and have diagonal joints. 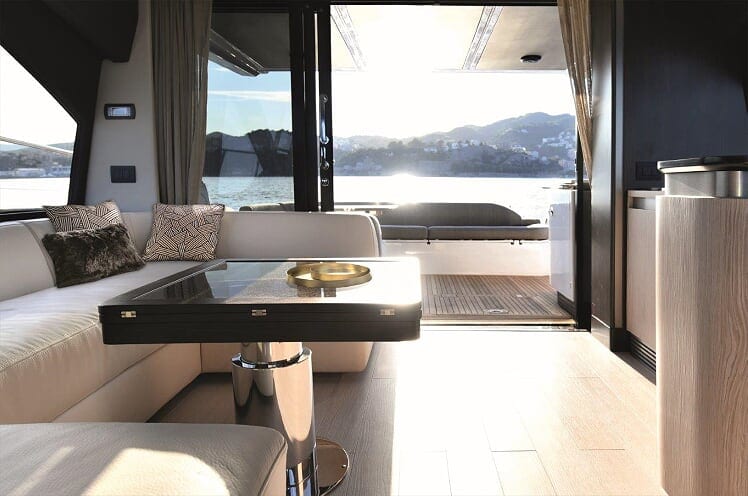 Francesco Guida, for whom this is his second project with the shipyard, has decorated the interiors using a style that draws on a modern and discrete sense of elegance and stands out for its freshness and refinement. The decor chosen for the launch sets off two different wood varieties, light and dark-coloured oak, against each other and combines them with wooden tops featuring original patterns and glossy finishes, as well as inserts inside shiny chrome-plated steel frames. The result is a welcoming atmosphere bathed in warm colourways. Lighting plays a key role, the combination of traditional lights with the use of extra indirect sources gives the spaces an airier feel.

The lower deck, reached by means of a central stairway, contains a night area made up of three cabins and two heads.

The decision to use three VOLVO IPS700 engines together with the extensive use of carbon fibre for superstructure, bathing platform, garage and hard top puts the S6 at the forefront of technology in the industry and delivers some major benefits, including fuel consumption efficiency, an area in which the S6 is in a position of leadership in its category, but also vibration, noise reduction. Another benefit of the triple propulsion system, besides a faster acceleration, is that it increases the distance between the external pivoting pods, clearly translating into superior handling response.

The compact engine room frees up space for a huge garage that can contain a 3.3-meter-long hydrojet tender. On the S6 too, Azimut Yachts offers a personalised tender, the PIRELLI J33 – Azimut Special Edition, built especially by Tecnorib.